I. Choose the word whose underlined part is different from the rest:

II. Choose the word or phrase (a, b, c or d) that best fits the blank space in each sentence or substitutes for the underlined word or phrase:

11. She swam strongly and ______ cross the river easily, even though it was swollen by the heavy rain.

12. The government has spent £2 million on an advertising ______ to encourage energy conservation.

15. All students can take part in the annual English-speaking Competition.

a. examinations     b. experiences

Choose one underlined word or phrase marked A, B, C or D that must be changed in order for the sentence to be correct:

III. Read the following passage and choose the best answer to complete the given sentence by circling the letter A, B, C or D:

The Asian Games, also called the ASIAD, is a multi-sport event held every four years among athletes from all over Asia. The games are regulated by the Olympic Council of Asia (OCA) under the supervision of the International Olympic Committee (IOC). Medals are awarded in each event, with gold for the first place, silver for second and bronze for third. This tradition started in 1951. The Asian Games are dominated by the People’s Republic of China. Competitors are entered by a National Olympic Committed (NOC) to represent their country of citizenship. National anthems and flags accompany the medal ceremonies, and tables showing the number of medals won by each country are widely used. In general, only recognized nations are represented, but a few non-sovereign countries are allowed to take part in. The special case of Taiwan was handled by having it compete as Chinese Taipei due to the political status of Taiwan.

A. dominated by the People’s Republic of China

B. supervised by the Olympic Council of Asia

C. rewarded with only gold medals

A. held every four years

D. All are correct.

28. Which of the following sentences is NOT true?

A. In general only recognized nations are represented.

B. Gold medals are awarded for the first place.

C. Taiwan was not represented because of its political status.

D. There are many sports events played in the Asian Games.

A. The Asian Games (The ASIAD)

B. The Olympic Council of Asia

IV. Rewrite the sentences, beginning with the words given:

31. Entering the room, I was surprised at what I saw.

33. “Would you like to go camping with us next week?” said Nam to Huy.

34. He drove into the car park and then walked to the office.

35. “How about giving Bobby a T-shirt on his birthday tonight?” said James. 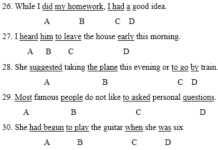